There’s this other blog see…

I’m kinda new to it as a concept, but if you’re into “language-learning worksheets” then buddy, you wanna go to http://graphicallyteaching.wordpress.com/ to see what that is.

If somehow, that doesn’t seem like the most interesting thing, you can sit this one out and wait until my next post about life in general…

They are some pretty awesome worksheets though.

Posted on November 8, 2011 by thejimmer
( if you want to maximize any of the photos – just click on them.  Cheers.) 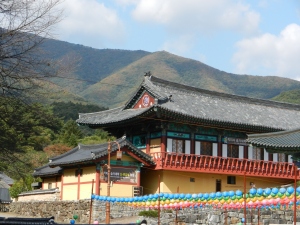 Long-neglected is this blog. Hopefully, this lil’ note’ll make it feel better a bit.
Where to start? Well, I”m still here in Gimcheon – doing my best to stay as isolated as possible for the sake of my guitar skills. I actually sound like a mediocre player these days – that’s exciting. It’s been 6 months, half of which doesn’t count. Listening to such a diversity of music that I don’t know where to start for picking one or six to focus on – so I have focused on the circle of fifths. Working on how the tones work together, rather than putting myself into someone else’s song just yet. So this is where my brain is. My fingertips have changed to where I can either barely feel with them, or they hurt. But just the tips.

It’s kind of a nice place to be doing this.

Teaching – I”m actually teaching. It’s nice – every day I have a different set of kids except for the set that repeats on Mondays and Fridays. I’m even on the verge of trying to remember three of the kid’s names. What a surge that is – huh? I like being a teacher that they both like and that makes them work. I can do that as a once-a-week’er more easily I think than I’m used to. Usually, students get a sense of regularity with a teacher where the balance is hard to find. But because I teach the same lesson to different groups, I can focus on it for one, then I can refine it as I pass through it. It’s cool like that.  Lots of teachers that aren’t my co-teachers are fun.  Some really go out and try to be friendly.  Here’s a science teacher who can speak about 24 words of English – but always kind. 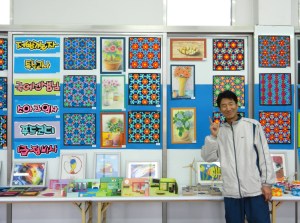 I found a huge collection of educational games today that I’m going to start integrating. I’ve been keeping it to the lesson for the whole trip – but the 3rd graders (of the middle school) just took their finals, and they’re actually finished and will start high school in February, after a month off in January. I’ve no idea what we’re expected to teach them for December, so I’m getting ready for anything.
Recently we had an expo of the kid’s art and such.  That’s where I took that picture from above.  Here are a few more. 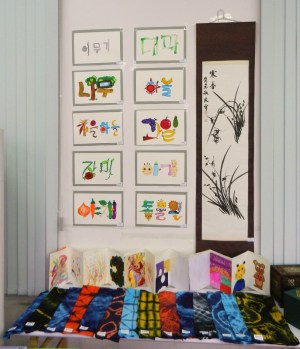 I’ll warn you that this site is not for your kids to peruse.  It is peppered with comically-engineered material that is as they say “not suitable for children” at times.  That being said – That link is here: https://sites.google.com/site/englishdroid2/teaching-tips/not-hangman-again

Grading is different here – in a big way. Kids don’t need to pass to pass. They just get promoted, no matter what they did on their exams. Wow. So if anything – the ones that are inspired to do well, are genuinely inspired – not just because of pressure to do well on tests. I’m sure that involved parents have a lot to do with it as well. I saw the final – it was 25 questions. 25. Some kids were done in five minutes. Seriously. Weird.

As far as it goes though – the classes are still on par with what I would expect in a country town in the states – I mean – seriously, my experience is very skewed. I teach at four schools that all have 60 kids or less. I have classes with five kids. It’s kind of ridiculous, in a nice way. My time here is more academic than anything else. I’m forced to focus more on myself than I ever remember being able to do, much less not having the option otherwise. There are a few Westerners here to hang out with, but I really only see them on the weekends, and so between Monday and Friday, it’s just me and the co-teachers for company. To be fair, two of them are genuinely interesting. That’s three of my days. So that’s cool. I can’t sit and talk stuff on the others, they’re lifers in the gig, and set in their ways – ways that I neither understand nor find reasonable for spending my time getting to know. But they aren’t trouble. They keep to themselves pretty directly, and that serves me fine. I hope I don’t come off like that.   Trying to focus on my guitar and all.

Meh – whatever.  I’m having a fine time, if not for the isolation that spins the brain a bit now and then.  Like right now – I just went for a walk to this cafe – took 20 minutes to get here, been sitting in the window for for nearly an hour in the busy, walking district of town, not one foreigner has passed by.  Some high school boys tried to talk to me – got as far as hello, and that was it.  They seemed pretty proud of themselves for getting there – got uncomfortable and left.  Heh.  I did kinda vibe privacy for the sake of this note, but still, one word in the last three hours, and that’s more than normal.   Thank god for headphones.

And I hike.  I’ve been able to get out and see some amazing places for sure.  Sculptors, check this out:

Which as situated somewhere near this…

… in this amazing scene… 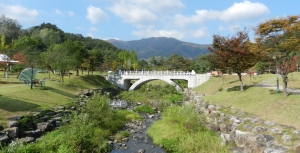 Jik Ji is one of the oldest temples in Korea, and has some fun hiking around it too.  I’ve been through it a few times now, and it’s still a good time.  The following picture is of the main building – now, mind you – the compound is something like 40 buildings, but this is the center one, the main one – inside are three giant paintings that are about 600 years old – the structure is about 400 years old, and the stone pieces in front are at least 800 years old.  Dig: 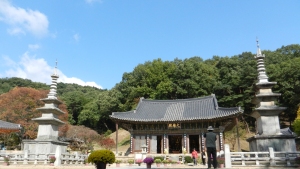 Then there was this time that one of my schools took me up to a mountain to check it out and have dinner under it….

Tell me it ain’t a good-lookin’ spot.

Then there was this…

So it’s understandable why I stay I think.  I have time to practice at arts that I’m trying to master, and am surrounded by all this weird coolness – and I’m fed fairly well.  All that’s missing is you.  I’ll get back when I can…  And you know I can.  But it’ll be a minute.