I’ve left Korea for an extended time now. The trip is that I pulled out a couple months ago and have had a wild time since.

I started in LA, went to Burning Man, then to Symbiosis, bought 9 plane tickets since my last post, met a particular woman as a key co-operator in this trail I’m on, am writing from Ecuador, and will need to change the title to and/or address of this blog. It will need to migrate, as I have done so as well. The new name and address will be created and published at a later time.
For now, a blog-post: 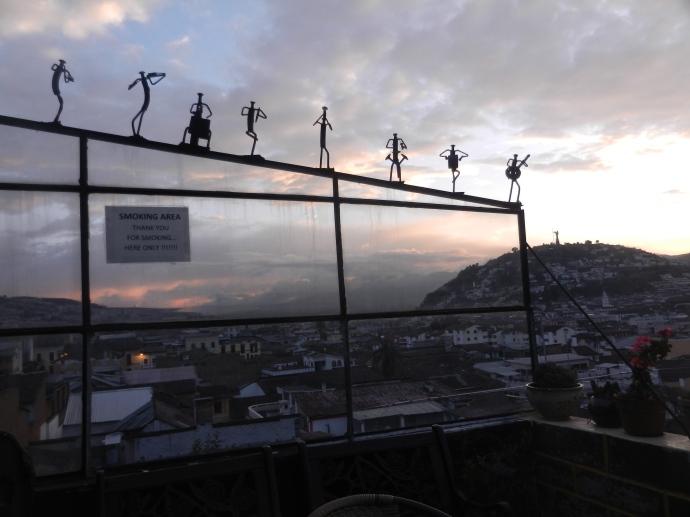 View from Quito off the edge of the rooftop lounge of The Secret Garden Hostel.

Wow!  What an amazing ride! I am in-fact in Ecuador at this moment at a cool little hostel made of stone, bamboo, palm fronds and hard wood. Populated by as many dogs as people, this place is a chill reality here in the mist of low-season on the beach-side of Montanita. I arrived here yesterday after a strenuous trip that brought me and my travel partner to places that had no name, places that were closed, places that were inappropriate-but-perfect and included a whole freakin’ lot of sitting on bumpy buses through the countryside of Ecuador.

For the first leg, I was kept awake as much by the need to pop my ears as we came down from the highlands as much as anything else. Unfortunately, it was night-time and couldn’t see the scene roll by. What I found the next day as our journey continued, was that the scene going by was questionable at least, and considering more, sad. There’re a lot of broke folk here in Ecuador, and it was apparent as we traveled that where people sometimes don’t have the same access to certain material elements, they can certainly improvise to create and maintain a way of life that brings about a happy and beautiful existence. Am I wrong to totally appreciate the graffiti? There was so much of it that I couldn’t get enough of!

Further in, I landed at a cool town that is finally chill enough that I can get some writing done. I’ve put pages into paper, I’ve caught up on some letters, and am finally re-emerging here in the text of Dataland. Not that I wasn’t in great places, but I need places that don’t have external elements popping about in order to write. I need to have something of a space that isn’t talking at me and asking for me to go have fun~ And lately, I’ve had a lot of fun!

To begin with, I landed in Los Angeles where a friend put me up in a space she runs that contains hundreds of artists in dozens of studios and shops that were all creative in their own ways~ This was a brilliant way for me to land after two years in Korea~

For two years, I’ve been able to work on being a graphics man, but nothing with weight to it, nothing that required a power-tool or anything of the sort. That was brilliant~ August 9th, 4pm, I got on a plane in Seoul, got off a plane in LA August 9th at noon. From there, I fell straight into the action of creative design and activity provided by that space. That~ was simply elemental.

After a few weeks there ~ only leaving for deli sandwiches and evening events- either with my cousins or hosted by Burning Man camps ~ I finally found myself headed to Burning Man with a band of strays from the City of Angels who were both organized and disorganized at the same time. Quite the cluster-f*3k at times, I was somehow able to have quite an amazing time in the center of the storm. Later named Gasket by my campmates for my positioning as an instrumental if somewhat only marginally effective buffer between two strong forces that were pressed uncomfortably against each other in the form of people in my camp, I was able to participate with some success such that I left the event feeling much better for the experience, including the meeting of the above mentioned lady-co-conspirator. 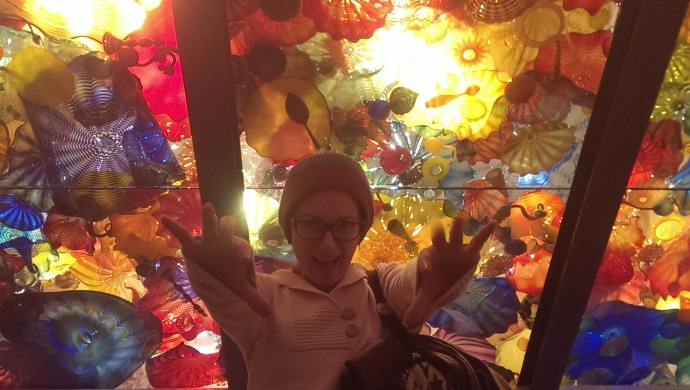 Coming from Burning Man, I was planning on visiting a friend who was in Utah~ An old friend who I consider one of the rare few who are worth extra effort, and as such, had planned a visit for a week with her. The visit was fun, peaceful, pleasant. As an odd overlap, the lady I alluded to earlier happens also to be a resident of Utah and had invited me to visit with her as well. Initially, I had expected it would be impossible. Luckily, there was an unplanned business trip that allowed me to visit with her for three days in an Idaho cowboy-town built around a set of hot-springs that provided quite a nice cleansing after the dusty event that Burning Man is, not that I hadn’t cleaned off, just~ very centering~ especially as I was hoping to get to know this particular human a bit better.  I went back to my other friend’s home with clear eyes and an open mind, enjoyed the rest of my visit and traveled on to the Bay Area where I had two other friends expecting me within the plan of both social visiting and a design of a new tattoo for my back. The first friend I met was an old friend who sketched the lines, the second laid me down and scratched my back with needles for an extreme amount of time resulting in a beautiful bit of art adorning my epidermis. To those two humans, I am deeply grateful.

Oddly enough, parts of the same group I camped with at Burning Man were also planning on being in the Bay Area at the same time and they asked me to join them to another festival for another production. As such, I went to Symbiosis and helped create a piece of art named Occam’s Razor. It was a 25 foot steel structure that we both produced on-site as an installation of performance art and utilized in a final show at midnight of the Friday/Saturday (I forget) of the event in a percussion format where we put all the people up on top and showed it off. The full video is here. That was fun.

Following that~ I went to SEATTLE~

Have I expressed to the internet (read: you) how much I love Seattle lately?

See, it’s the city that so amazingly welcomed me when I was looking for a place to call home so many years ago with the warmest embrace that I can never forget or lose the feeling of. It was the most amazing thing to me to have been travelling between 1995 from place to place until 2001, when I arrived to Seattle and found a community that was able to take me in all my weirdness and animation and show me how I could be useful and appreciated at the same time, with gusto. So, of course I’ve called it home ever since, even if I have mostly lived in Asia since 2007. No matter. Seattle is still where I go back to. I have my closest friends in the highest density there, I like the weather, the city still prides itself as being a leader in the world of arts and all things cool. Just try and sell me on another city, I’ll show you a hard sell.

So I went back~ for three weeks I planned on being there~ Friends had offered their homes to me to use while I was there, and events were planned, leaned in on, and improvised so that I could see as many of my friends as humanly possible while I was there. That was good.

Okay, so dig~ Not only all that~ but the lady I mentioned that keeps requiring extra words came north to visit… She induced me to become a tourist in my own city~ much to my pleasure~ where we went as far as actually signing up for one of the underground tours through the old city- which I had never done~ Glad I did~ She was great company~ we went all over the city together~ To many places that I recall as my favorite places just so she could see them, and I was pleased as punch to share them with her. So pleased~

So now I’ve left Seattle and am chillin’ on the coast in Mantanita, Ecuador getting ready for a 5-week class based on becoming a better teacher by relaxing on a beach. 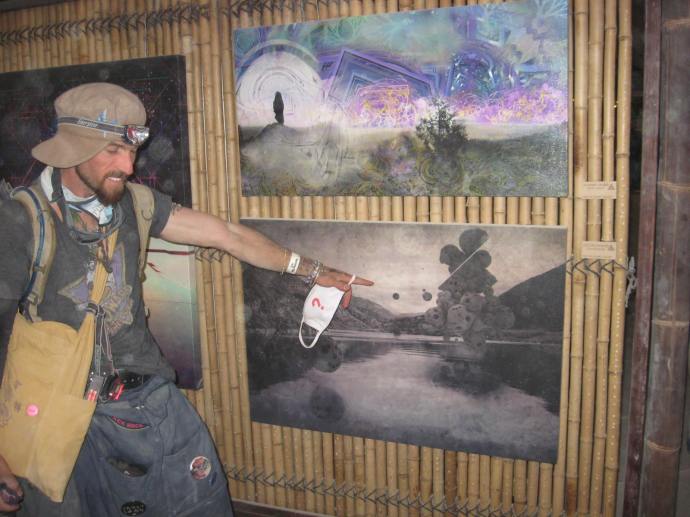 But like I said, this is about the last bit for this blog. I am no longer in Gimcheon.

Goodbye Korea~      So long and thanks for it all…