Trouble Squad plus a few, minus a few, tromped up to the near top of Gumo Mountain this after noon. Joined by Nichole, Marcus, Natalie and a spare Dutchman; Ryan, Tom, Cortney, Rene and myself all hopped onto the stroll of the adventure of the hike in a way that brought smiles to the miles. Fun stroll it was, heading from the train station. We meandered to the hill in about a half an hour and found ourselves going by the lake to the inevitable incline that would come. 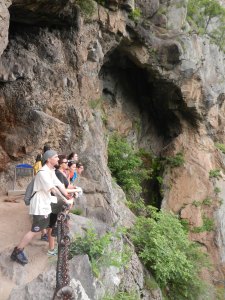 I saw one bro, Tom, go off his own way and the others to the left so asked what was up. Heard he was hiking the first half and the others were taking a cable car. Decided to join my man who is a veritable rock-hopper. I was notably slower than him and blamed it on half a hangover and the ice cream I’d had for breakfast which I mentally marked up to extra calories available for use. So we spun up the hill past a Buddhist temple to a waterfall and I had to walk on in. It was brilliant. The rocks were green with algae and the water was cool as a dream after the crazy-swift assent we’d just pulled off. We actually got there faster than the guys in the cable car. When the others arrived, we all hung out and played like children in the water and with our cameras.

The beginning of the next stage was stairs. About 500 yards of stairs. That’s a lot of stairs. We almost lost a few of our group to amazed exhaustion that the rest of us played off somethin’ ridiculous. The folks soldiered on and we headed into the interior. 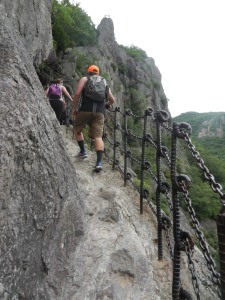 The mountain-proper was a delight of challenging rocks and interesting switchbacks. At one point we even found a guy carving a tree with a saxophone nearby. It was pretty awesome… Until… The rain started.

At first, we cursed it and hoped it would let up. It was just a slight drizzle, then it just opened up ~ The water was pelting us somethin’ fierce! Folks ran for shelter under bushes and cursed the storm again, but with such meaning… We knew we’d turn back.

There’d been a turn-around-and-call-it lobby for a full kilometer already. One of the leaders of the lobby grabbed the fastest hiker and turned around and disappeared. They were out of sight before the rest of us had our heads out of the bushes. Well, to be honest, I just stood there under my umbrella with a playful smirk and waited for my friends. They were getting drenched. I kind of had to laugh. Earlier, I’d been one of the two who’d gone under the waterfall, so I was wet already, but my bag was staying dry~ That was important. But yea, I waited for my friends to re-emerge, coming to terms with the fact that they were in fact, going to be completely soaked through and the rain was going to stick around for a while. We began our descent with our eyes on the rocks underfoot, knowing that they had thus become slippery and we treaded through the path which had since become a stream. 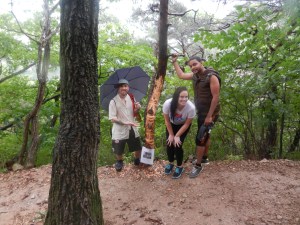 All but one of us took a spill at one point, that one being Nichole, but we made it down full of laughter and pleasure at the weird turn of events. In fact, one of the nicest parts was when we took the cable car down. The view was brilliant, and it was a nice way for us to catch our breath.

All in all~ a very good time, even with the calamity. 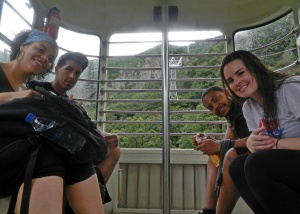 Click here to let me know what you're thinkin'. Cheers! Cancel reply